What on earth are The Spotty Internet Trolls™ ?! O ne day we got an unwelcome visit from one of the Saskatchewan Leprechauns (you’ll remember them from the Groovy Framing Elves™ page; they were the ones who tried to pass themselves off as ‘Shoemaker Elves’).

This one was swathed in polyester and shot his cuffs constantly. He had shifty little rodent eyes, white shoes and belt, waggling eyebrows, and a toothpick in his mouth that was always in motion…he looked like a weasel with a pompadour.

As The Colonel (Karla Elder) was preparing to frogmarch him off of the premises, he said, “Wait!  I understand you’re having troubles with your website.”

“Get out” The Colonel said.

He shot his cuffs “I know some guys.”

“Get out” The Colonel said, grabbing handfuls of polyester.

“They’re terrific!” he said as he sailed out the door.

“Tell you what, I’ll have them get in touch and see what they can do for you,” he called over his shoulder as he sprinted down the back alley, The Colonel in hot pursuit, kicking him in the seat of his pants about every third step.

A scream split the air at Jackson’s that was so startling it caused Owen (Karla’s husband) to leap and clack his teeth together.

One of the Groovy Framing Elves™ had gone into the furnace room to discover, to her horror and surprise, three spotty trolls looking for a DSL connection.

After the hubbub died down the Groovy Framing Elves™ explained that these must be ‘The guys the Leprechaun knew’.

The Colonel kicked them out, but the next evening as we were shutting out the lights, there they were, sitting there making sort of chewing noises as they hunted and pecked on their keyboards.

She kicked them out again.  They came back again.  This continued for almost a week before The Colonel turned to Owen and said with that chilling finality “YOU deal with it”.

Naturally, Owen took this to mean, “I love these things and think they should become a permanent attraction around here!”

They sluff along and move like they’re underwater and they have huge fat, stubby salami fingers that you wouldn’t think could hit just one letter on a keyboard.

Their speech is a sort of monosyllabic grunting, and judging from the litter they leave behind, they seem to subsist on a steady diet of ketchup chips, pickled herring, and no-name pancake syrup (which the Elves refer to as “telephone pole syrup”).

Thankfully this fug vanishes when exposed to sunshine.

They won’t really make eye contact with, or stand up to, the Groovy Framing Elves™, who constantly admonish them like bun-haired old schoolmarms scolding large, clumsy, brain-addled puppies who’ve eaten all the cat’s food and missed the paper on the kitchen floor.

I don’t know where they go during daylight hours, under a bridge somewhere, one supposes…

Since they were here, The Colonel put them to work

They do what’s asked of them, sort of, but it takes forever and you have to explain things so many times that one often wonders if it just wasn’t faster to learn how to do it oneself.

So, I suppose we’re stuck with them.  They don’t actually get paid, and they do a pretty rotten job, but we haven’t figured out exactly what to do about it…they won’t leave! Our Goal is to Make Our Clients Happy!

Nobody has the level of Training, Education, Awards, Distinctions and International Acclaim that We Do!

Check out our Awards and Distinctions

Check out our Awards and Distinctions!

Request an Appointment at Jackson's Gallery and Engraving 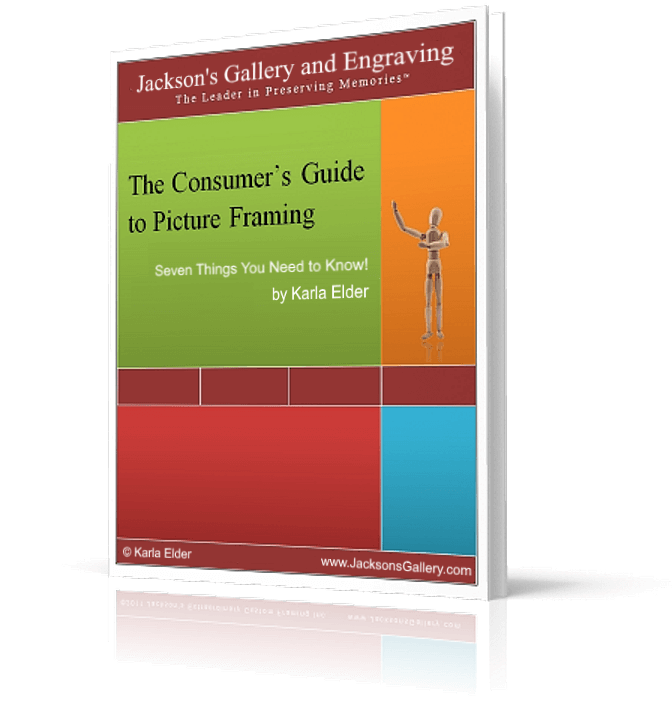